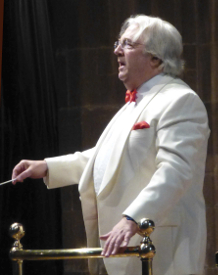 Graham has held the position of Director of Music to the Chester Music Society Choir since 1996.

Born on the Wirral, Graham Jordan Ellis has been associated with the musical life of Merseyside for many years and has achieved a considerable reputation as an experienced conductor of both choral and orchestral music, working with many choral and operatic societies, with amateur, youth and professional orchestras, including Das Schwäbische Symphonie-Orchester of West Germany, Philharmonic Concert Orchestra, Northern Chamber Orchestra and the Royal Liverpool Philharmonic Orchestra (RLPO).

In 1990 he founded the Liverpool Sinfonia, an orchestra of freelance professional players which appears with him regularly. Graham has also worked for BBC radio and television. In 2000 he was commissioned to write the choral work Degrees of Joy for the centenary of the Liverpool Welsh Choral Union and this received its première in the choir’s Centenary Gala Concert with the RLPO under his direction. With this chorus and the RLPO he subsequently conducted an acclaimed performance of Elgar  The Kingdom.

His particular interest in English music is reflected in performances of Finzi “ Intimations of Mortality”, Britten “War Requiem”, Elgar “The Music Makers”, Elgar Cello Concerto, Blackford “ Mirror of Perfection”, works by Leigh, Butterworth, Howells and others, and a special performance of Elgar “The Dream of Gerontius” in Liverpool Anglican Cathedral with the Philharmonic Orchestra and a chorus of 300 voices to mark the one hundredth anniversary of the work’s first performance.

He was recently elected as an Honorary Fellow of the Guild of Musicians and Singers, alongside Dame Mary Archer, Mark elder, Vasily Petrenko and Rick Wakeman